Nobel’s next nominees? Six impactful discoveries that could be future winners

This week, the 2020 Nobel Prize in Chemistry was awarded to Emmanuelle Charpentier and Jennifer A. Doudna for their foundational discovery of CRISPR gene-editing technology. This technology has had wide-ranging impacts, enhancing how we diagnose human diseases, develop new treatments, and even grow food. The chart below shows the explosive growth in CRISPR-related research published after this foundational discovery. 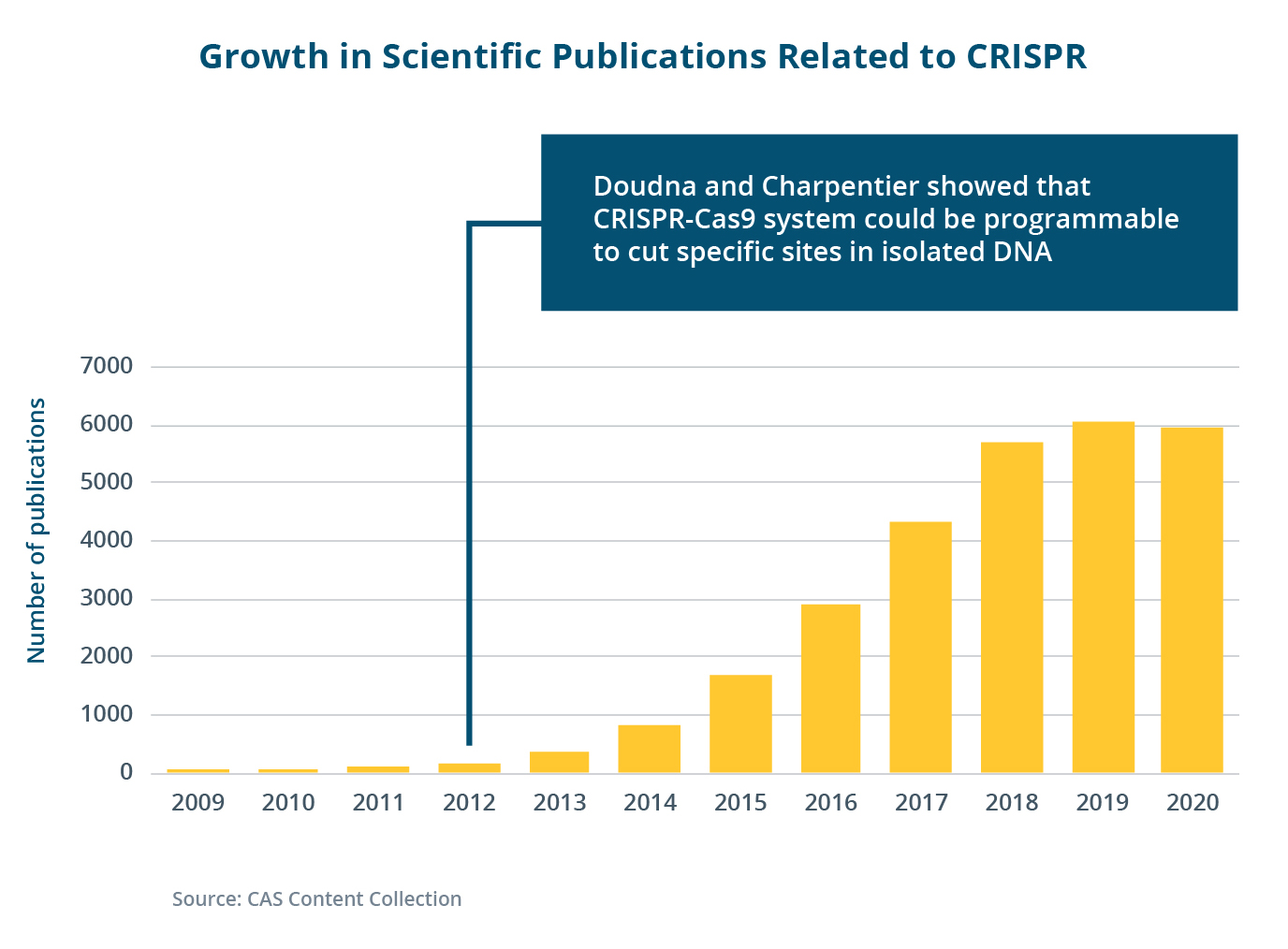 In selecting the winner(s) each year, the Nobel Committee has the unenviably difficult task of sifting through a myriad of tremendous research achievements in search of those that have had the greatest impact and delivered the greatest benefit. Given the extraordinarily high standard of chemistry research across the board, this is no easy feat.

With this in mind, my colleagues and I in the CAS scientist corps have carefully considered what we believe to be the most impactful chemistry research that has not yet been honored with a Nobel Prize. Keep an eye on these deserving researchers and discoveries in future years – and Nobel ceremonies – to come.

Gray demonstrated the pioneering technique of long-range electron tunneling in proteins, and measured rates of electron transfer using specially modified protein biomolecules. While electron transfer is a fundamental process, little was known about the chemical factors governing it within biological systems. Holm, on the other hand, has worked on the synthesis, stereochemistry, electronic structure and reactivity of transition metal compounds; he prepared the first synthetic analogs of the active sites of iron-sulfur proteins, and has helped develop synthesis routes for the low-molecular-weight ‘metalloproteins’ that duplicate biological clusters in enzymes. Lippard, considered one of the founders of bioinorganic chemistry and metalloneurochemistry (the study of metal ions and their effects in the brain and nervous system), has developed platinum-based anticancer drugs in the ‘cisplatin’ family, and elucidated the structure and function of an enzyme that allows microbes to live on natural gas (methane monooxygenase). His work has applications for cancer treatment, environmental bioremediation, and the development of synthetic fuels.

DNA replication is the essential mechanism underpinning biological inheritance. Marvin H. Caruthers is a leader in this field for his development of breakthrough techniques for chemical DNA synthesis. His research group has developed advanced methods for the phosphoramidite synthesis of DNA. These methods have gone on to enable genetic engineering of new biopharmaceuticals, support forensic DNA fingerprinting, and enable the human genome project. DNA synthesized via these new methods has also been incorporated into ‘gene machines’ to help scientists analyze DNA and gene expression. Overall, Caruthers’ work has transformed protein and DNA synthesis from highly specialized exploration into a widely used tool for research, diagnostics and forensics.

Highlighting the massive impact of this foundational work, Tenchov notes, “Methods for chemically synthesizing DNA were a breakthrough that dramatically advanced biological research and expedited growth of the hugely successful biotechnology industry.”

Scientist Chad A. Mirkin is the most cited chemist in the world in terms of total citations and the most cited researcher in nanomedicine. He has made major contributions in fundamental and applied nanoscience, nanomaterials, nanomedicine and nanolithography. Mirkin is widely recognized for his development of nanoparticle systems for molecular detection, his work on supramolecular chemistry and programmable nanomaterials, and the invention of dip-pen nanolithography (which allows the creation of extraordinarily sophisticated surfaces for use in biosensors and nanoscale chips). Mirkin also discovered spherical nucleic acids; these structures, made by chemically arranging functionalized nucleic acids on the surfaces of nanoparticle cores, have enabled the development of extremely sensitive diagnostic probes for early diagnostics, as well as drug delivery systems capable of crossing biological barriers.

Tenchov sums up the impact of Mikin’s contribution saying, “Overall, Mirkin’s work set up the foundation for modern nanotechnology and development of related diagnostic, therapeutic and material applications.”

Photoresists, light-sensitive polymers that change in structure when exposed to radiation, are used in the coating and manufacture of computer microprocessors. Specifically notable is work by C. Grant Willson, Jean Fréchet, and Hiroshi Ito that has enabled development of photoresists that can be used to selectively coat, protect and extend the control and lifespan of the silicon wafers from which computer chips are made. This allows the properties of chips to be changed as needed, i.e., whether it is easy or difficult to dissolve in solvent, so that chips can be patterned as desired. Willson and Fréchet have developed photoresists that degrade rapidly at lower intensities of light, while Willson and Ito have developed photochemically-initiated acids that trigger chain degradation reactions in existing photoresists (where absorption of a single photon degrades many polymer chains).

CAS Information Scientist Robert Bird, who specializes in synthetic organic chemistry, highlighted the functional impact of this technology, “The combination of new materials and additives allows computer chips to be manufactured using shorter wavelengths and lower intensities of light, providing denser features and increased power relative to their size. This makes modern computers, smart phones, and other consumer electronic equipment both possible and more affordable.”

A term coined by Professor K. Barry Sharpless, ‘click chemistry’ describes reactions that can be used to rapidly connect molecules under ambient conditions. Sharpless envisioned forming enzyme inhibitors by coupling smaller molecules at the active site of an enzyme; his laboratory helped develop regioselective copper-catalyzed versions of a particular reaction (the azide-alkyne Huisgen cycloaddition) for forming isomeric chemical compounds (1,2,3-triazoles). The method has since been used to prepare polymers, antibodies and pharmaceuticals because of its ease and reliability.

Bioorthogonal chemistry, a field named by Carolyn Bertozzi in the late 1990s, describes reactions that occur rapidly under biological conditions (either at or near room temperature, in aqueous solutions, in the presence of biological molecules, and at low concentrations). Bertozzi and her research group developed a form of the Staudinger reaction to study the carbohydrates found in biological systems: a reaction in which an azide reacts with ester-substituted triarylphosphines to produce a neutral dipolar molecule (an iminophosphorane). Furthermore, Bertozzi’s laboratory developed a method for cycloadditions that does not require a potentially toxic copper catalyst and, therefore, can be used in living cells to study extant biological processes (strain-promoted azide-alkyne cycloadditions (SPAAC)).

Bird highlights the impact of this work, “These techniques have enabled preparation of new drugs, including current-generation antibody--drug conjugates, and diagnostic agents, and have helped researchers to more easily and unambiguously determine biological pathways.”

CAS Information Scientist Min Wang, a specialist in fullerenes and polymer chemistry, emphasized the importance of ATRP saying, “ATRP is one of the most robust methods for preparing polymers with precisely controlled molecular architectures.”

Scientists Krzysztof Matyjaszewski, Ezio Rizzardo and Mitsuo Sawamoto have played a key role in developing this methodology, which is widely used for vinyl and acrylic monomers. It overcomes the significant disadvantage of radical polymerization in conventional methods, which can lead to uncontrolled molecular weight distributions due to the unavoidable fast termination rates between radicals. ATRP controls the polymerization process by deactivating propagating radicals to form dormant species (which can further be intermittently reactivated by transition metal catalysts). ATRP allows more uniform polymer chain growth of a wider range of monomers with different chemical properties in the field materials.

These foundational breakthroughs, and the further work built upon them, demonstrate the iterative and connected nature of scientific discovery. Every single day, thousands of new publications reveal fresh insights that could be the key to advancing another researcher’s work. CAS collects, curates and analyzes the world’s disclosed science, empowering researchers with insights to catalyze the next discovery – and maybe a future Nobel. Our team at CAS is motivated by this common goal to make connections between the work of global researchers that we know will ultimately accelerate solutions to our world’s biggest challenges. See how.

Which chemistry breakthrough do you hope will be recognized next year? Let us know in the comments.

Coronavirus Variants: The Delta Variant and the Future Impact of Viral Mutations

Our evolution is a job that is never done

CAS, a division of the American Chemical Society, partners with R&D organizations globally to provide actionable scientific insights that help them plan, innovate, protect their innovations, and predict how new markets and opportunities will evolve. Leverage our unparalleled content, specialized technology, and unmatched human expertise to customize solutions that will give your organization an information advantage.